Demographic data is critical in planning the future transportation system.  Demographic data is composed of employment, housing units, and population. Each of these components serves different aspects in the transportation planning process. Employment and housing units are used in travel demand modelling. The population projections have a lots of uses including economic projection, demand management, and comparisons between communities.

The Demographics-Update-Technical-Report updates the 2012 Demographic projections to a base-year of 2015 with projections provided for every five years until 2045.  This demographic update allows BTPO to validate the assumption used in the 2012 plan and to extending the projected data to 2045.   In summary, the estimates for 2015 and the actual 2015 numbers were very consistent in magnitude but missed in assigning the growth to specific Traffic Analysis Zones (TAZ).   For example, the 2015 projection housing units were 30,137 and the actual number of housing units in 2015 was 30,166.  The method used to determine employment was the biggest change in the 2015 report.  An error in determining self-employed workers led to an over-representation of employment within the region.  Employment in 2015 and future projections was reduced by about 10,000 employees.  After the adjustment, the projected 2015 numbers were very close to the actual 2015 numbers.  Therefore, the projections and control total for 2020 to 2040 from the 2012 report will be used.  Only the allocation to the 613 TAZs will vary.

On November 7, 2016, the BTPO Policy Board approved the annual updated of the demographic data.  Providing tracking between the five-year intervals was one area targeted for improvement.  Employment control total data comes from US Bureau of Economic Analysis (BEA) CA25N Total Full-Time and Part-Time Employment by NAICS Industry for the Pocatello, Idaho Metropolitan statistical area.  The table below shows the trend using the 2014 estimated employment.   The growth rate for employment went down from 1.87% to 1.77%.  The projected BTPO 2015 control total is 37,430 while projecting the BEA data the 2020 employment number would be 39,302.   BTPO considers this to be still on track.

Housing units provide a similar story.  BTPO tracks building permits as a way to track households and population between the censuses.  The 2015 projections have the number of housing units increasing between 2015 and 2020 from 30,166 to 30,513 units.  An average of 347 housing units needs to be built annually to meet this projection.  In the period from May 2018  to May 2019, only 241 units were built.  The household and population data assume a 4% vacancy rates the lower number of units might be an indication that growth is behind or that vacancy rates are moving lower. 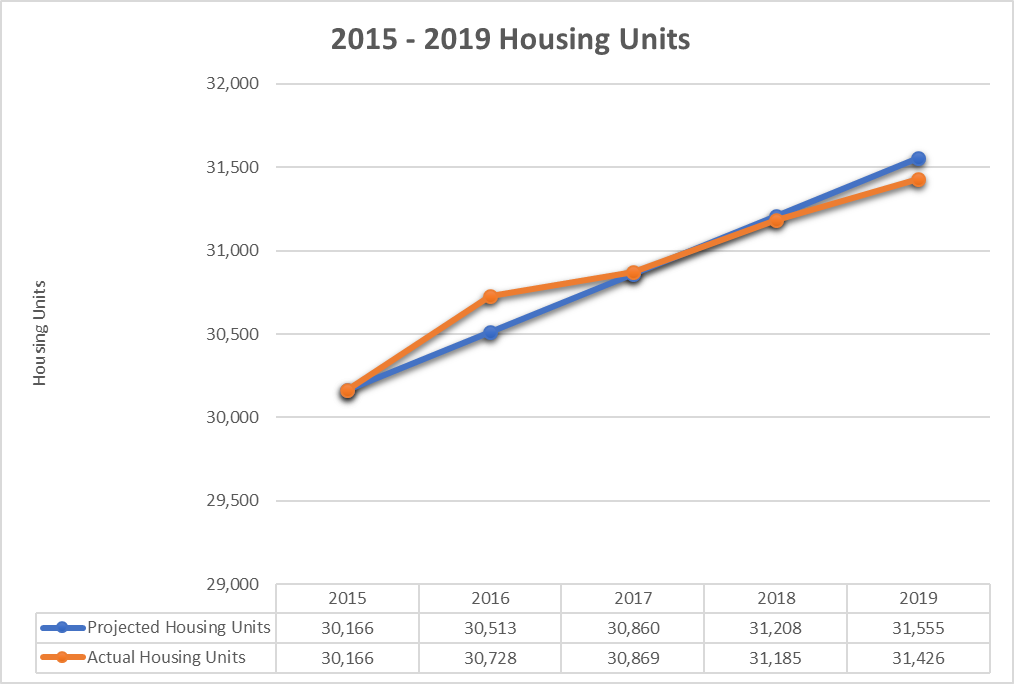 Design and hosting by Rave Communications.